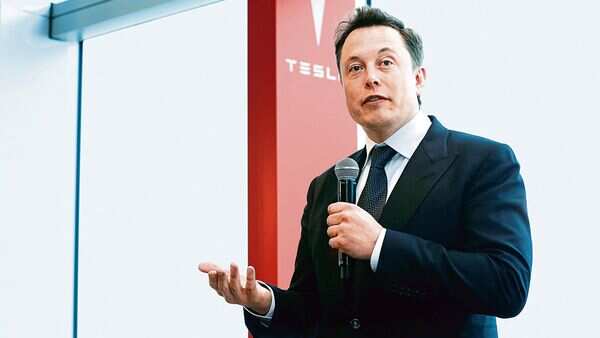 Shares of Tesla jumped at the opening bell Monday after the electric car maker announced its second stock split in less than two years.

The company said in a regulatory filing, and also in a tweet, that it plans to make a request at an upcoming annual shareholders meeting to increase its number of authorized shares so that it can split the stock in the form of a dividend.

It did not say when a split would occur or the ratio of such a stock split, but it would follow similar maneuvers by a trio of tech companies that have seen their shares soar in recent months.

And the company is growing. CEO Elon Musk opened Tesla’s first European factory last week, a “ Gigafactory ” in Germany that will employ 12,000 people and produce 500,000 vehicles a year.

“Given the stock’s meteoric run its not a surprise that Musk & Co. are heading down the path of another stock split especially with robust EV demand and the build-outs of the flagship Berlin and Austin Giga factories now on a glide path, said Dan Ives, who follows Tesla for Wedbush.

A stock split does would change the price-per-stock, but not the overall value of those holdings. It can push up the price of a company’s stock, at least temporarily, and the announcement did just that on Monday.

Tesla Inc. said that its board has greenlighted the proposal, but that the dividend is contingent on final board approval.

Tesla had a 5-for-1 stock split in August 2020, which went into effect one day after the company announced that it planned to sell up to $5 billion worth of its stock. Just three months later Tesla said that it was planning another stock sale, looking to raise up to $5 billion in that offering.

Tesla follows other tech giants that have seen the price of shares vault out of reach of most investors. Alphabet, Google’s parent company, announced a 20-for-1 split in February Amazon.com Inc. said this month that it would do a split of the same ratio.

“We view Tesla’s move following the likes of Amazon, Google, Apple and initiating its second stock split in two years as a smart strategic move that will be a positive catalyst for shares going forward,” Ives wrote in a research report.

In a filing with the Securities and Exchange Commission, Tesla said it would include more information, including the date and place of its annual shareholder meeting, in an upcoming proxy statement.