(25 Feb 2022)
Singapore Airlines Group has reported its first
quarterly profit since the onset of the pandemic.

The third quarter net profit of $85 million came amid a significant step-up in air travel to and
through Singapore in the October – December 2021 period, as well as continued robust demand and strong yields in the cargo market.

Singapore’s launch of Vaccinated Travel Lane (VTL)
arrangements and its subsequent expansion, as well as the
group’s nimble response, resulted in it being the first to
open sales on almost all available routes, helped unlock pent-up
demand during the year-end travel season.

The group carried
1.1 million passengers during the quarter, more than five
times the number from a year before and double that of the
second quarter of FY2021/22.

Passenger capacity, measured in
available seat-kilometres (ASKs), grew 183.8% year-on-year, as SIA ramped up flights in response to the VTLs. By the end of
the quarter, group passenger capacity reached 45% of pre-COVID19
levels. 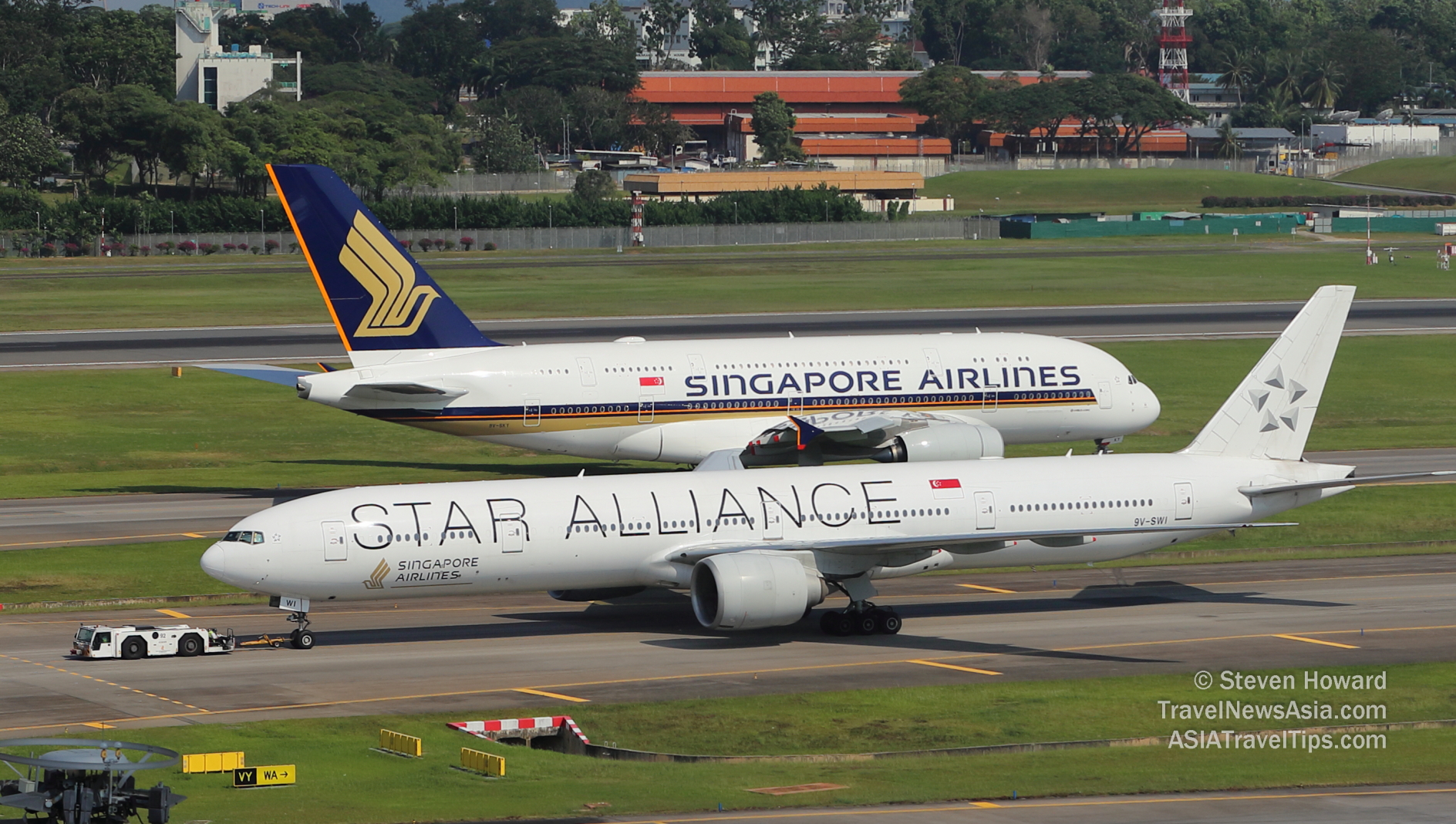 Singapore Airlines B777 and A380 aircraft at Changi Airport. Picture by Steven Howard of TravelNewsAsia.com

Passenger flown revenue
increased by $650 million (+355.2%) to $833 million, on the back
of a 556.8% growth in traffic (revenue-passenger kilometres, RPKs)
that outpaced capacity expansion, resulting in the passenger
load factor rising 18.9 percentage points to 33.2%.

Cargo flown
revenue rose by $607 million (+81.6%) to $1,351 million,
surpassing the $1 billion mark for the first time and setting
yet another new quarterly record.

The expansion of operations resulted in group
expenditure growing $842 million (+60.2%) year-on-year to
$2,240 million. This increase consisted of a $359 million
increase (+131.0%) in net fuel costs, a $331 million increase
(+26%) in non-fuel expenditure, and $152 million from the
year-on-year impact of the fuel hedging ineffectiveness
recorded last year and fair value changes on fuel derivatives.

Net
fuel cost rose to $633 million, mainly on higher fuel prices
(+$330 million) and an increase in volume uplifted (+$173
million), which was partially offset by a swing from a fuel hedging loss to a gain (-$144 million). The increase in
non-fuel expenditure by 26% was well within the 183.8%
increase in passenger capacity and the 49.2% increase in cargo
capacity.

As a result, the SIA Group recorded an operating profit
of $76 million for the three months ended December 2021,
versus a $331 million loss from a year before (+$407 million).

April to December 2021 – Profit and Loss

As
international air travel progressively recovered over the course
of the year, SIA Group’s operating loss for the nine months to
December 2021 narrowed by $1,651 million or 75.3%
year-on-year, to $543 million.

Group expenditure
increased by $791 million (+16.2%) year-on-year to $5,686
million. This increase consisted of a $793 million increase
(+122%) in net fuel cost, a $488 million increase (+12.7%)
in non-fuel expenditure, and an offset of $490 million from
the year-on-year impact of the fuel hedging ineffectiveness
recorded last year and fair value changes on fuel derivatives.
Net fuel cost rose to $1,443 million mainly on higher fuel prices (+$763 million) and an increase in volume uplifted (+$419 million), which was partly offset by a swing from a fuel
hedging loss to a gain (-$353 million). The increase in
non-fuel expenditure by 12.7% was modest, relative to a 296.1%
increase in passenger capacity and a 49.4% increase in cargo
capacity. The SIA Group continues to exercise cost discipline as
it pursues efficiency and cost reduction initiatives as part
of its ongoing three-year Transformation programme that began in
FY2020/21.

Group net loss was $752 million for the first nine
months, a year-on-year improvement of $2,857 million. This was
largely attributable to the better operating performance
(+$1,651 million), and the absence of $1,630 million in non-cash
cost items recorded in the previous year, partly offset by a reduction in tax credit of $474 million.

As a result of the
stronger performance for the third quarter, the SIA Group recorded an
operating cash surplus of $322 million for the first nine months of the year. This reversed the operating cash burn that
it had been experiencing since the start of the pandemic.

By the end of the
third quarter, the group had raised $21.6 billion in fresh
liquidity since 1 April 2020. This includes proceeds from the
Rights 2021 Mandatory Convertible Bonds (MCB), which raised
$6.2 billion in additional liquidity in June 2021.

As of 31
December 2021, SIA Group shareholders’ equity was $22.1 billion,
an increase of $6.2 billion compared to 31 March 2021. Cash
and bank balances saw an increase of $4.3 billion, rising to
$12.1 billion primarily due to the Rights 2021 MCBs. Total
debt balances increased by $0.6 billion to $14.9 billion, mainly
due to the increase in lease liabilities as a result of
sale-and-leaseback activities. Consequently, the group’s
debt-equity ratio fell from 0.90 times to 0.67 times. In addition
to the cash on hand, the Group retains access to $2.1 billion
of committed lines of credit which remains undrawn.

During the quarter, the strong demand for VTL
services enabled the reactivation of A380 operations to London
and Sydney.

The average age the group’s aircraft is six years
and three months.

During the quarter, with the continued expansion of
its network, the group saw a significant increase in the
number of destinations that it served, led by the
restoration of services to 12 cities in India, including VTL
services from Chennai, Delhi and Mumbai, as well as the
resumption of flights to several points in South East Asia.

SIA also launched services on the Singapore-Vancouver-Seattle
route, and resumed flights to Houston (via Manchester).

Scoot
launched operations to Gatwick (via Bangkok) and Davao, and
resumed services to Jeddah.

The group’s passenger network covered a total of
85 destinations, up from 65 in the previous quarter, with
SIA serving 63 and Scoot serving 35.

The group’s cargo network
comprised 95 destinations, up from 78 as at the end of the
prior quarter.

SIA also resumed passenger services
to Denpasar in February 2022, while Scoot launched operations to Miri,
and resumed operations to Amritsar, Gold Coast and Hanoi
during the first two months of 2022.

In the coming months, the
A380 fleet will expand its operations to Delhi, Mumbai and
New York via Frankfurt.

Based on current published schedules,
the SIA Group expects passenger capacity to reach 51% by March
2022. This should result in an average capacity of 47% for the
fourth quarter of FY2021/22, compared to pre-COVID19 levels.

The group expects to serve over 70% of its total pre-COVID19
destinations by the end of the financial year.

Scoot will progressively include Chiang Mai, Cebu,
Clark, Davao, Hong Kong, Jeddah, Krabi, London (Gatwick), and
Phuket to its VTL network, and will also increase its frequency
for services between Singapore and Phuket.

With these new additions, the SIA Group will operate VTL services from 49
cities in 25 countries to Singapore.

During the Northern Summer
operating season (27 March 2022 to 29 October 2022), SIA will
resume daily non-stop services to Newark. With this, SIA will have thrice daily services to the New York City metro area alongside
twice daily flights to John F. Kennedy International Airport.

The Singapore-Vancouver-Seattle service, which was originally
planned as a seasonal operation, will continue beyond the current
Northern Winter.

Services to Cairns and Darwin are also expected to resume in the coming
months.

SIA successfully raised a seven-year US$600 million
(or about S$810 million) bond in January 2022. This is SIA’s
second US dollar-denominated bond issue, building on its
successful debut issuance last year. Inclusive of this bond issue,
SIA has raised around $22.4 billion in additional liquidity
since 1 April 2020. SIA also has access to more than $2.1
billion in committed lines of credit.

This liquidity strengthens
its financial foundation, enabling the group to make strategic
investments to secure its position. Deepening collaboration with
like-minded airlines remains an integral part of the group’s strategy
and the recent expansion of separate partnerships with Garuda
Indonesia and Malaysia Airlines will see the airlines working
closely to offer more options and value to customers.

While demand
should continue to recover, especially on VTL services, SIA
expects passenger
traffic to moderate in the fourth quarter after the
end of the year-end holiday season.

Following a record peak
period in the third quarter of FY2021/22, SIA has said that it
expects overall air cargo
demand to ease in the fourth quarter. This is in line with seasonal fluctuations, and the traditional slowdown in
exports during the Lunar New Year holiday period. Nonetheless,
both air and sea freight capacities are expected to remain tight during the quarter, supporting loads and yields. 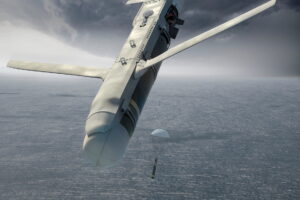 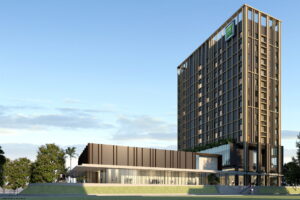